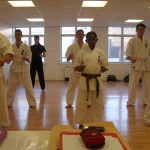 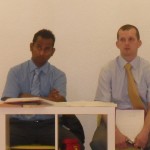 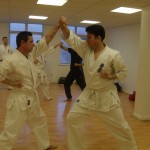 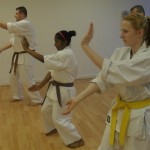 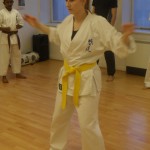 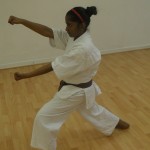 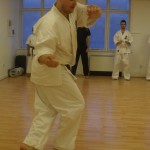 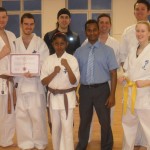 On the evening of the 9th April 2013 four of our newest members participated in their first Kyokushin grading. The evening was also the first of a 2-part grading for students being assessed for the higher ranks of 4 kyu, 1st kyu and shodan. The grading panel consisted of Sensei Prasanna Fernando (4th dan) and Sempai Mark Moore (1st dan).

As is traditional for grading tests the participants completed their warm-up exercises before the formal start.To begin with the senior grades were tested on their ability to recite the Dojo Kun (the written ideals that all Kyokushin students should strive for). All the students were then tested on their ability to adopt and move-in the various stances whilst simultaneously executing blocks, kicks and hand-strike techniques.

The participants were then assessed on their ability to perform Ido-geiko. (Combinations of techniques) Whilst some combinations assessed knowledge and recall of those taught previously, others were made-up up by the examiners to test each student’s ability to adjust quickly and perform under pressure.

A tiring hour into the grading came the important assessment of each student’s ability to perform all the Kata (various pre-formed sets of moves) required for the various grades.

The senior grades were then asked to demonstrate their kata (Pinan kata and ura,Yansu,Tsukino kata,Gekisai dai and Gekisai sho,Seipai etc:)and understanding of the Bunkai(practical applications) of various sections of the kata.  For those taking their first grading the test was then completed with a test of strength and power that included the performance of sit-ups, squats and knuckle push-ups.

For those being examined for 4 kyu, 1st kyu and shodan the tests of power and fitness were tested to a higher level on a second evening when these candidates also had to demonstrate Go-shinjutsu (self-defense) skills and a high standard of kumite (fighting) through consecutive fights with “fresh” opponents.

The grading was a great success; Daniel, Gregor, Jonathon and Matt were all double promoted to 9th kyu – a result of the commitment that all four have shown to their training since they joined the club. Amy performed very well and now justly wears a 4th kyu green belt. Sathmi, the youngest member of our adult class showed great character to be promoted to 1st kyu.

Lastly, it is our dojo honor to congratulate Maciej Chudzik on his promotion to SHODAN Black Belt. Well done everybody.  Osu! 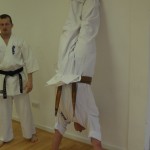 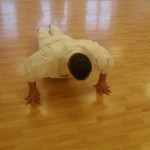 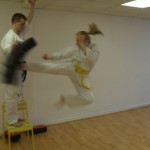 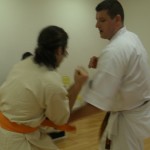 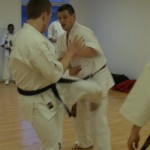 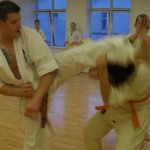 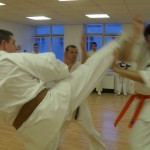 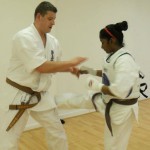